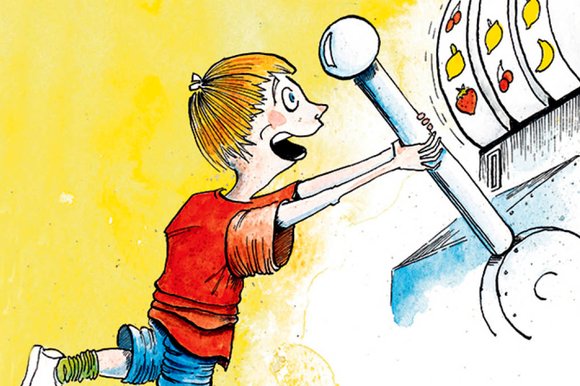 The object of their adoration? Slotomania, which has turned the humble slot machine into an online phenomenon. It is top dog in a rapidly expanding set of online, old-fashioned casino games that compete with more recent digital successes such as Candy Crush Saga.

The games, available on Facebook or, more likely these days, on a mobile phone, are free to play, and players don’t actually stake any money. Rather, as with Candy Crush and its peers, they pay to buy extra chips or spins to extend games. They cannot cash out when they win; it’s all just for fun.

For the companies behind the games, it is serious business. Social casino games, as they are known, are on course to generate worldwide sales of almost $3bn (£1.9bn) this year and show no sign of slowing down. Slotomania, launched four years ago, and a string of rivals such as Hollywood Spins and Mirrorball Slots enjoyed a record quarter this autumn, according to Eilers Research, an American firm that tracks the industry.

But just as online gambling initially prompted fears that gaming sites would make it easier for criminals to launder money and for youngsters and the vulnerable to part with their cash, critics have accused online social casino games of being especially attractive to young people, possibly helping them to develop a taste for gambling. The accusers have a catchy slogan that sums up their fears — “slots for tots”.

Unlike real money games, social casino games are entirely unregulated. Because players are not staking money and are not cashing out any winnings, the sites and apps fall outside the scope of strict gambling regulations in Britain and America.

The lack of oversight has irritated a more unlikely quarter: internet gaming companies, some of which believe they face unfair competition. Although those behind social casino games deny that what they offer is gambling, the products are similar.

“A company can put the same brand of slot machines on Facebook with no regulation, no licence, pay no gaming tax and make more money than the same machine in Las Vegas . . . it makes no sense,” said an executive at one gambling technology company.

There is a good reason why software developers have opted to use gambling themes to draw in players: they are a tried-and-tested formula. Whereas the makers of Angry Birds and Candy Crush Saga are reliant on coming up with repeat smash hits to keep their business juggernauts rolling, games based around gambling require little new thought. “Casino games are not very original but they are proven,” said Mitch Garber, chief executive of Slotomania’s owner Caesars Interactive Entertainment, the online gaming offshoot of the Las Vegas casino giant behind Caesars Palace.

Garber knows all about the travails of real gambling businesses. He was chief executive of online poker operator Party Gaming when America banned online real-money poker and casino wagering in 2006.

ON THE fourth floor of a drab office block on the fringes of east London’s Tech City, software developers at Plumbee are busy working on new ways to keep you entertained while you fiddle with your smartphone. They seem to be good at it. Last year, revenues at the company more than doubled to almost £12m.

Plumbee, which employs 65 staff, is one of the few British businesses at the forefront of the social casino games movement. Mirrorball Slots has helped it to secure 1.5% of the market, making it a minnow next to the likes of Caesars, America’s IGT, which is better known for making casino equipment, and Zynga, a social gaming pioneer that has notched up a string of hit titles, most famously Farmville.

According to Raf Keustermans, a Belgian who moved to London 10 years ago and is chief executive of Plumbee, success in social gaming is a numbers game. “Typically, fewer than 5% of players spend money,” he said. “If you have a million players, 5% is 50,000. If they pay $10 a week, that becomes a business. It’s based on having a big audience.”

But critics worry that the games may appeal to the wrong kind of audience, in particular young people, for whom they may be the first taste of an experience in some way related to gambling. “We should take a cautionary approach,” said Mark Griffiths, professor of gambling studies at Nottingham Trent University. “Even when games don’t involve money, they introduce youth to the principles and excitement of gambling.”

Although politicians in Britain are clamping down on various forms of gambling, social casino games have so far escaped the level of scrutiny directed at electronic roulette machines in betting shops. “If there is evidence that certain games are leading young people to start gambling then we need to look closely at the regulation around those games,” said David Lammy, Labour MP for Tottenham. The Gambling Commission has a web page dedicated to the topic but it has not been updated since May last year.

The social gaming industry has not been as laid-back. Responding to “concerns” that games encourage youngsters to gamble, its trade body, the International Social Games Association, last month published research that found “a tiny proportion” of under-18s play social casino games. Youths aged 13 to 18 accounted for just 0.15% of users that pay to play, it said.

Garber denied the industry had a case to answer. “It’s very easy to say that these [games] are ‘slots for tots’, except tots aren’t playing,” he said. “We don’t want young people to play our slots. We don’t market to young people. Our games largely appeal to middle-aged women.”

It is a view shared by Keustermans, who said: “We have more players over 60 than under 30.” He suggested that younger people are not interested in casino-style games because they have no hand in the outcome. “Kids want more action, a game where they are in charge. After a busy day, most of our players don’t want to solve a difficult puzzle, they just want to [play] a few slots.”

SENSING the shift towards these new games, many of the large online gambling companies understandably felt they could grab a piece of the action. City analysts egged them on, suggesting that social gaming would boost the growth of their real-money games.

It has proved a lot harder than they imagined.

Take Bwin Party, the London-listed operator. In May 2012, it boldly announced plans to invest up to $50m to create a new games studio called Win and launch a series of social gaming apps.

More than two years on, it is nowhere. Its Slots Craze game is one of several “non-core” operations that are likely to be sold. “It has not done what we had hoped,” admitted an insider.

Caesars is a rare example of a traditional company making a real go of it in the social games arena. Many of the other market leaders are software providers or equipment manufacturers which already own content and intellectual property that can be used in the new environment.

Established online gaming companies may need a fresh approach. One that thinks it may have found a way to bridge the gap between no-money games such as Slotomania and more traditional online betting is Gaming Realms, an AIM-listed entity that counts Rich Ricci, former head of Barclays’ investment bank, as an backer. Its shares have soared 57% over the past year, and it is valued at almost £70m.

Patrick Southon, chief executive of Gaming Realms, said: “What we are trying to do is [offer] real-money gaming but with the features that work in social games.” Those features include adding extra levels and challenges to spice up a game.

Not that traditional gambling and betting-related companies have given up hope of capitalising on the new phenomenon. Last month, Churchill Downs, owner of the venue that stages the Kentucky Derby, spent $885m to buy games developer Big Fish, one of the biggest of a stream of deals in this niche industry over the past few years.

For all the success social casino games enjoy, their performance is still “dwarfed” by top-grossing titles such as Candy Crush , according to Adam Krejcik at Eilers Research, though, as he acknowledges, “the ability to penetrate the mass market remains a large opportunity”.

The challenge is likely to prove as addictive for industry executives as their games are for customers.

Sheldon Adelson, the billionaire behind the Venetian on the fabled Las Vegas strip, has been among the more prominent supporters of an aggressive campaign in America to try to ban internet gambling.

The effort has been stepped up as some states, including Nevada and New Jersey, have allowed certain forms of online gambling, and more are expected to follow. They see it as a smart way to boost taxes.

Adelson, a Republican party donor, has said he does not “want a casino to be put on every kitchen table or iPad” and called internet gambling “fool’s gold”.

He wants to beef up the Wire Act, introduced in 1961 to outlaw sports betting, by extending it to other forms of online wagering.

However, his campaign has been branded as self-serving by critics such as former presidential candidate Ron Paul.

The former Republican congressman wrote last month that Adelson was using his political influence “to turn his online competitors into criminals”.