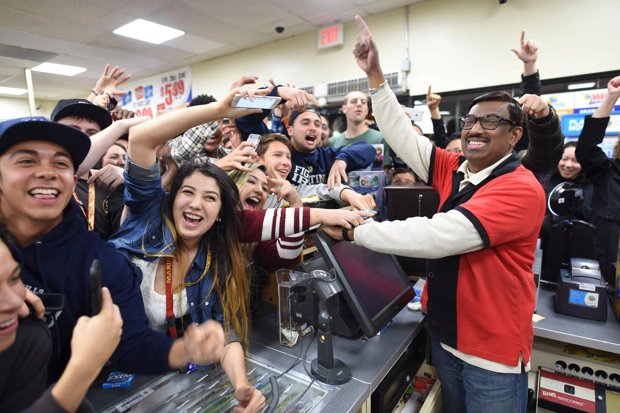 Residents of Chino Hills, California, celebrated into the night after a local convenience store sold one of three tickets that scooped a share of a record $1.6 billion lottery jackpot.

Crowds gathered outside the 7-Eleven, chanting the name of their town and celebrating with the shop worker who sold the winning ticket, identified as M Faroqui. The purchaser has not yet come forward.

Mr Faroqui had good reason to celebrate: the shop will receive a $1 million bonus for selling the lucky Powerball ticket just a few minutes before the numbers — 4, 8, 19, 17, 34 and the bonus ball 10 — were drawn.

The other winning tickets were sold in Florida and Tennessee, but these ticket owners have also not been identified. Each of the three winners is expected to receive a windfall of $528.8 million.

The fact that the record jackpot was shared means that the record for the largest individual win is still held by Gloria Mackenzie, 84, from Florida, whose solo ticket scooped $590.5 million in May 2013.

The odds of winning this week were at least one in 292 million, but the mania surrounding the draw was so great that lottery executives warned people not to splurge life savings or retirement plans on what they called cheap entertainment.

Apart from the jackpot, among the larger prizes given out this week were eight tickets worth $1 million and one worth $2 million.

About 1.3 billion players have also received a total of $11.8 billion from lesser prizes that range from $4 to $2 million.

Lottery officials said: “It is clear that the large jackpots attract players’ attention but the large number of winning experiences is what keeps players coming back to the game.”

Had no winning tickets been sold this week the jackpot would have increased to $2 billion for the next contest. Instead it will fall to a less exciting $40 million.