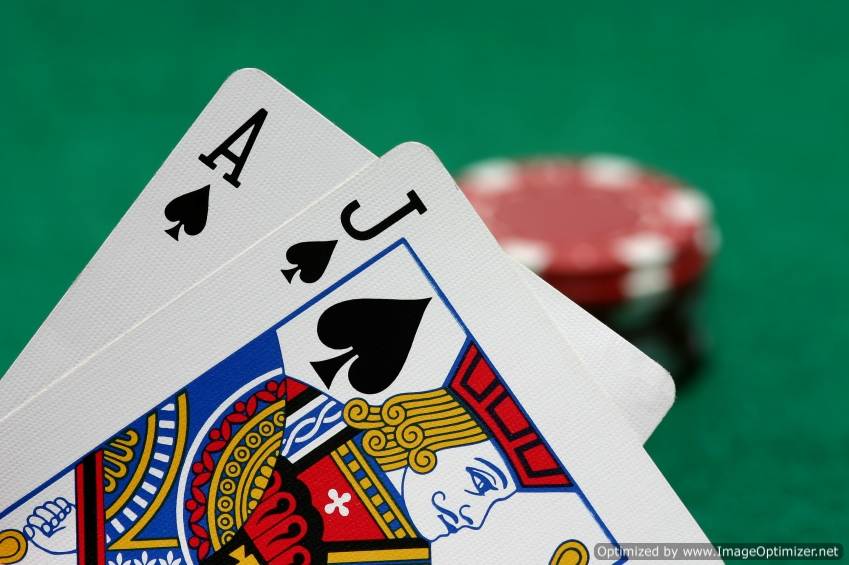 A card is selected, remembered and returned to the deck. You riffle the end of the deck with a snap and two cards magically turn face-up – the two black Jacks. Unfortunately neither of them is the selected card. The Jacks are replaced in the deck but left face-up and the deck is cut several times. Finally the cards are spread out to reveal that the two black Jacks have now trapped one card between them. It is, of course, the chosen card…

This uses the key card handling in a slightly different way. Before you perform the trick, you must take out the two black Jacks and place them face-up at the bottom of the face-down deck. When you bring out the deck, don’t reveal the presence of the face-up Jacks.

Begin by holding the deck face-down in the right hand and shuffle off some cards into the left hand as you ask a spectator to call out ‘Stop’ any time they like; the same selection procedure as used in the Card Crime trick.

Thumb off the top card of the left-hand packet and ask the spectator to look at and remember it before putting it back. Drop the right-hand packet of cards on top of the selection and square the deck. You can, if you wish, now shuffle off a few more cards from the top to the bottom of the deck. Just be careful not to disturb the cards in the middle of the deck, which is where your two face-up Jacks now lie.

Tell the spectator that you’ll snap your fingers and make the selected card turn face-up in the deck. Snap your fingers, but do it twice. Spread the deck between your hands to reveal that there are now two cards face-up in the middle of the deck – the two black Jacks (1). ‘Oops: sorry. Should have only done that once – is either of those the card you chose?’

They aren’t, so you offer to use the black Jacks to find their selection. Take all the cards which lie above the face-up jacks and put them to the bottom of the deck. Then spread the top few cards so that the Jacks can be seen. ‘The black Jacks will find your card: let me show you.’ Because of your handling earlier, the card immediately below the Jacks is the spectator’s selection.

Square up the cards in the left hand but, as you do, stick your left little finger under the third card from the top so that it keeps a break between the top three cards and the rest of the deck (2). The illo shows an exposed view from the side. From the spectator’s point of view, the break is totally invisible.

With your right hand, lift off the top three cards together. The right fingers are at the front of the packet and the thumb at the inner end (3). The left thumb then peels the top card of this packet back on to the deck and pushes it forward slightly so that it overhangs at the front. This is known as an ‘outjog’ (4). From the audience’s point of view you are just displaying the two faceup black Jacks, but in reality you have the spectator’s selection hidden under the right-hand Jack. Place this Jack under the deck so that it sticks out a little at the inner end. This is known as an ‘injog’ (5). Be careful that you don’t expose the face-down card hidden below it.

‘Two Jacks with another fifty cards between them and one of them’s yours. Watch the Jacks go into action.’ Square the Jacks up so that they’re flush with the deck and then give the deck a complete cut. Hand it to the spectator, inviting him to give the deck a second cut. Make sure he completes the cut, taking a block of cards from the top and placing them on the bottom.

Then ask him to give the deck one more cut, ‘for luck.’ That’s three cuts in total. To the audience, it’s the equivalent of mixing up the cards but, as explained in the previous trick, this cutting procedure doesn’t alter the sequence of cards. What the cuts have done is brought the two black Jacks together either side of the selected card.

Snap your fingers over the deck and then ask the spectator to spread the cards slowly between his hands. He’ll find your two black Jacks face-up in the centre, but now there’s a single face-down card between them (6). Reach into the spread and take out this three-card sandwich. Ask him to name his chosen card, then turn the three cards over to reveal that they’ve succeeded in finding his selection.