The most popular oil panting in the Dogs Playing Poker series is ‘A Friend in Need’ which was released in 1903 and shows dogs cheating at poker. This picture is the most beloved and recognisable of the series, and is often simply referred to a Dogs Playing Poker instead of its original name. 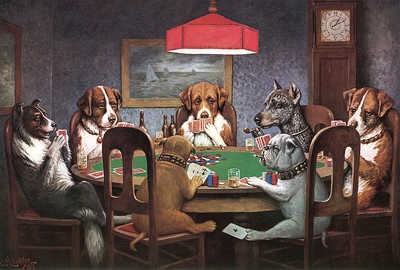 However, the oil painting series is more than dogs acting in a human-like way. The majority of people view the paintings as examples of working-class taste in home decoration. Others view the series of paintings as an idea of the middle-class lifestyle of the 1900s, and how male centric it was. Every painting in the series is dominated by male dogs and only a handful of female dogs appear, and are often excluded from pictures altogether. It is also believed that Coolidge painted the pictures to mock the upper class in their excesses and attitudes. Although these views are based on peoples interpretation of the paintings.

Over the years, the Dogs Playing Poker series has been referenced in popular entertainment mediums, such as TV. The Simpsons has made several references to the oil paintings – most notably during a Treehouse of Horror episode when Homer notices the painting. Other shows such as Family Guy have ‘altered’ their interpretation of the painting a have had Mayor West playing poker with dogs in a school basement. However it’s not just TV shows where the painting have been referenced. Weird Al Yankovic has mentioned the painting in his song ‘Velvet Elvis’, and the indie game ‘Undertale’ has dogs playing poker in a restaurant.

Many artists have gained inspiration from Coolidge’s work and have included animals in their own work. For example William Wegman has placed real dogs in scenes and then photographed them. Other artists such as Arthur Sarnoff have created many pictures of canines engaged in various activities that range from sitting behind slot machines to golf. Not many artists have attempted to re-create Coolidge’s original work.

However it’s not just artists that have been inspired by Coolidge’s work, advertising companies have also used the idea of using dogs to portray a message. In 2001 the Nebraska group Tobacco Free Hall County commissioned the marketing firm Bailey Lauerman to create artwork for an anti-smoking campaign. However instead of dogs playing poker, a smoking spaniel has killed all the other dogs at the poker table by second hand smoke. Although not a joyful has Coolidge’s work, it still helped spread a message – much like Coolidge’s work.